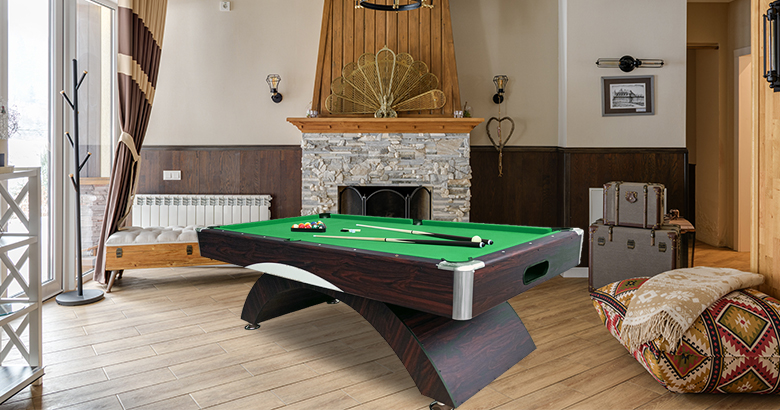 Billiard pool table is played differently in England and America. Snooker is a popular sport in Europe and Ding Junhui is good at it. The more popular game in the United States and Canada is 8-ball or billiards/billiards.

Billiard pool table is a good investment for a qualified family, it can keep you healthy and happy in your spare time, billiard sports fall under the category of slow aerobic exercise, is the best way to lose weight.

Playing billiard pool table can cultivate your mental concentration, not to be disturbed by anything outside, attention will improve over time.

If chess is a test of a person's intelligence, competitive challenge is a person's physical fitness, then billiards movement, is a combination of strength and wisdom, billiard pool table movement is based on the knowledge of mathematics and mechanics, combined with different strokes and tactics, strategies, is a kind of sports activity, but also a kind of thinking training.

In England and America, billiard pool table is played differently. In Europe, snooker is a popular sport, and Ding Junhui excels at it. 8-ball, often known as billiards, is the most popular game in the United States and Canada.

If chess is a measure of intelligence, the competitive challenge is an assessment of physical conditioning, then billiards movement is a combination of power and common sense. Billiard pool table movement is based on mathematical and mechanics knowledge, combined with different strokes and tactics, and strategies, is a type of sports activity, but also a type of thinking training.

1. Also known as "spots and stripes," "solids and stripes," or "highs and lows," this is a very popular game. It's played on a billiard table with six pockets and comes in a variety of regional versions.

2. Eightball is played using 16 balls and cue sticks in each game. The players begin by stacking all of the balls in the center of the billiard table, save for the white cue ball, and then breaking them apart with their cue stick and a cue ball. The seven striped balls or the seven solid balls must be pocketed by the players.

1. This is a more modern game, and while it was once renowned for being merely for the purpose of making money, it has recently established itself as a real game.

2. On the table, there are ten balls, one of which is the white cue ball. Players try to pocket the nine ball in order to win the game, but they must first make contact with it with the cue ball.

3. To begin, all balls except the cue ball are put in the middle of the table, and players then break the rack to separate the balls. By striking the lowest ball and pocketing the nine balls without fouling, a player can win.

4. Various rules and variations have been developed, resulting in a variety of derived games such as six-ball, seven-ball, and ten-ball.

1. While straight pool used to be the most popular game in championship competitions, faster-playing games have lately surpassed it due to straight pool's slower speed. Players can try to fire any ball into a pocket as long as the cue ball hits it first.

2. In the center of the table, fifteen object balls are stacked. There are several regulations regarding breaking the rack, one of which is that two balls plus the cue ball must contact the rail once the rack is broken. Players can shoot to whatever pocket they wish, then they must first call the ball they want to sink as well as the pocket they want to send it to.

3. Every ball that is lawfully pocketed earns the player a point. During the game, the goal is to accumulate a set number of points.

1. During this game, only one pocket per player is used, despite the fact that there are six pockets on the table. Players compete to score points by pocketing an object ball into one of their designated pockets.

2. If a player fouls, the turn is over and the opponent receives a point.

3. If a player fouls three times in a row, the game is over. Another difference between this game and the conventional pool is that players do not have to call their shots.

1. With a regular set of balls, this game is usually played by three people or a team. Each participant is given five numbered balls, and the aim is to be the last person standing with one of their balls remaining on the table at the end of the game.

2. Players can keep playing as long as they can legally pocket a ball on every shot; but, if they don't have any of their five balls remaining on the table, they are eliminated and can't play any further.

3. This game comes in a variety of versions that allow for additional players, multi-game scoring, and different spotting and scratching rules.

1. This is a hybrid game that incorporates both pocket and carom billiards. In the game, there are two cue balls and a red object ball. Various cue balls are used by different teams or players.

2. Players begin the game by striking their cue ball up the table, which bounces off the cushion and returns to them. Whoever gets their cue ball closest to the balk cushion is the one who breaks.

Carom billiards, often known as "carambola," is played on pocketless tables using heated slate as the playing surface. The goal of the game is to score points by shooting a cue ball off the opponent's cue ball and into an object ball in one stroke.

This game is played on a regular six-pocket table, but it requires 22 colored balls and a white cue ball. Players must strike the colored balls with the cue ball in order to pocket them in the correct order.

Power snooker is a popular snooker variation that is supposed to be considerably more thrilling and faster than the original game, making it fun for both players and spectators. During the 30 minutes of play, players compete in timed bouts using nine red balls.

This intriguing game is played with only three object balls and a cue ball. Betting on the outcome of a game is quite prevalent among players and spectators. Each player attempts to pocket all three balls as rapidly as possible while using as few shots as feasible.

SZX offers popular billiard tables or pool tables in a variety of colors. It has four chromed bands on each of the four corners. It has a trendy and classic appearance that may appeal to your eyes. A nice playing experience is provided by the durable build and solid legs. This model comes in a variety of sizes, giving you additional options. The size is appropriate for a leisure and pleasure center at home.