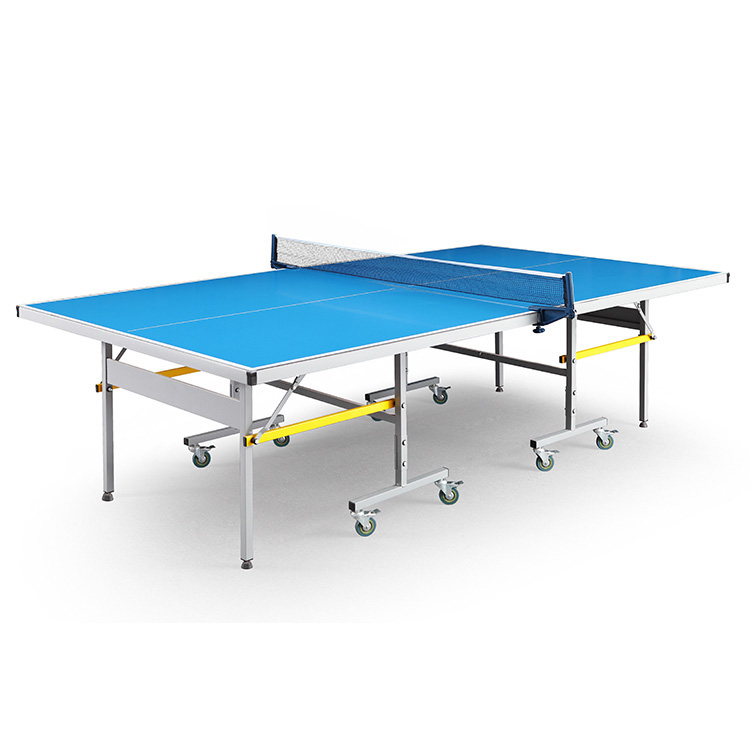 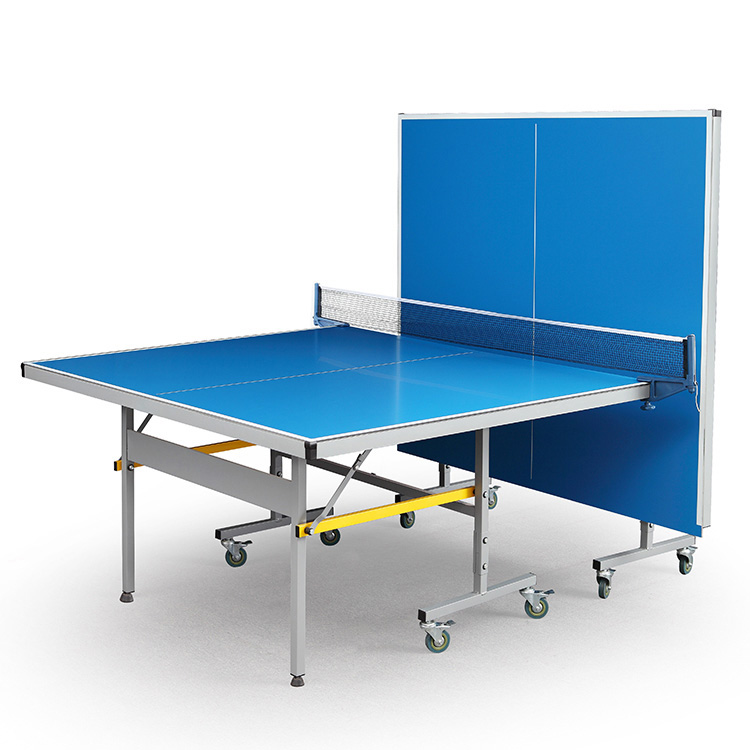 The table has a foldable table that allows you to train even in a small space. The table can be folded down when not in use to reduce the amount of space it takes up. Movable casters are installed on the legs of the table so that you can move anywhere and anytime without being distracted by the court.

This table tennis table adopts 6mm aluminum plastic plate. The table top has a large elastic limit and is not easy to be deformed. It can keep good flatness for a long time and has good weather resistance even in harsh outdoor environment. 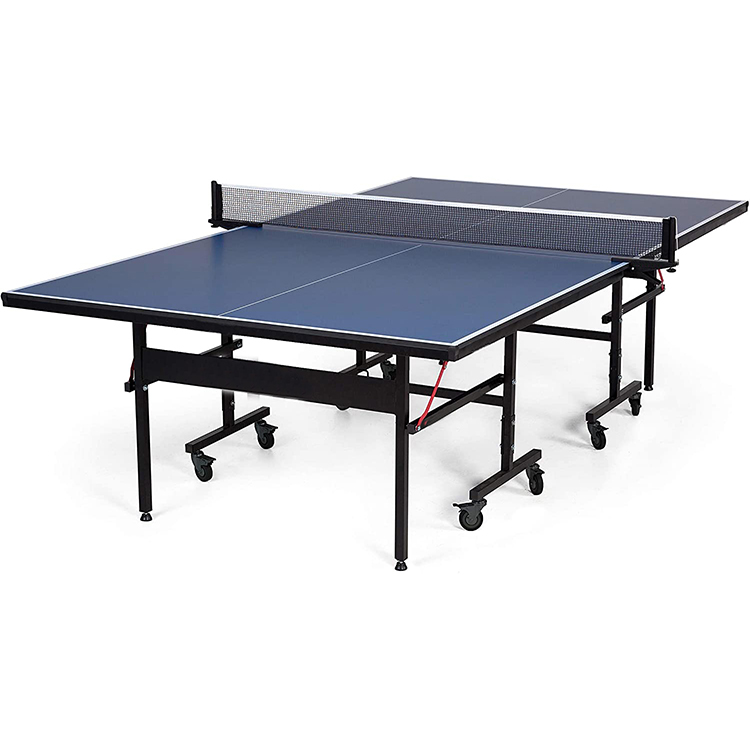 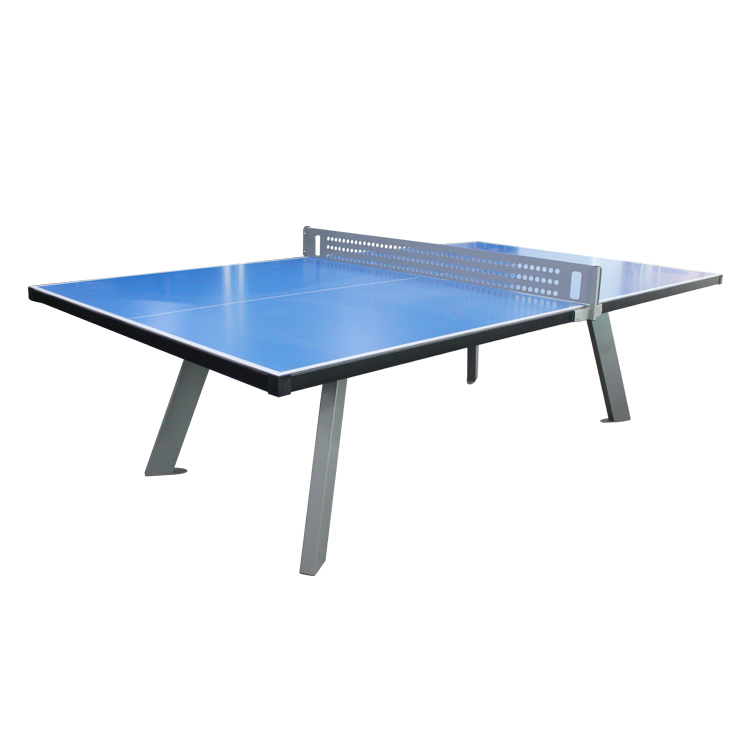 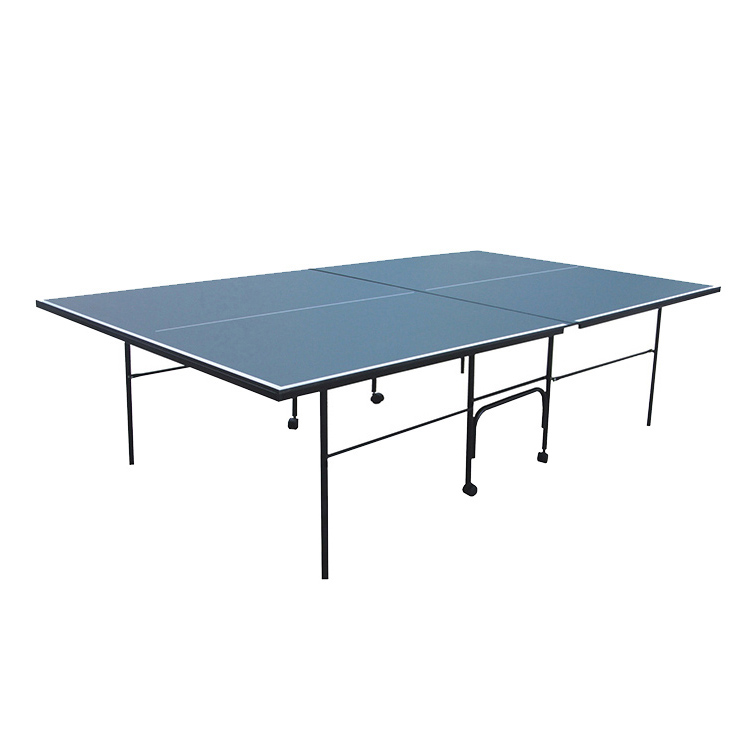 Outdoor Table tennis, commonly known as  Ping-Pong, is a ball game played on a flat table separated into two equal courts by a net fastened across its width in the middle. The goal is to knock the ball over the net and bounce it on the opponent's half of the table in such a way that the opponent cannot reach it or accurately return it. The light hollow ball is driven back and forth across the net by the players' little rackets (bats or paddles). The game is well-known all around the world. It is a highly structured competitive sport in most nations, particularly in Europe and Asia, particularly in China and Japan.

The game was created in England in the early twentieth century and was first known as Ping-Pong, a trading name. When the ancient Ping-Pong Association, founded in 1902, was resurrected in 1921–22, the term table tennis was used. The original association disbanded in 1905, but the game continued to be played in sections of England outside of London, and by the 1920s, it was being played in numerous nations. The Fédération Internationale de Tennis de Table (International Table Tennis Federation) was created in 1926 by delegates from Germany, Hungary, and England, with original members being England, Sweden, Hungary, India, Denmark, Germany, Czechoslovakia, Austria, and Wales. More than 165 national associations were members by the mid-1990s.

Tools, rules, and play of the game

3. The round and hollow ball was formerly composed of white celluloid. Since 1969, a celluloid-like material has been utilized. The ball, which might be white, yellow, or orange, weighs around 0.09 ounces (2.7 grams) and has a diameter of approximately 1.6 inches (4 cm).

4. The blade of a racket, or bat of table tennis table, is normally constructed of wood, is flat and solid, and may be coated with a thin layer of conventional stippled, or pimpled, rubber, which may be layered over a thin layer of sponge rubber and may have the pimples inverted. A racket of any size, weight, or form may be used.

1. A match comprises the best of any odd number of games, with each game won by the player who first reaches 11 points or who takes two clear points ahead after 10 points apiece.

4. The serve is done from behind the table, with the server throwing the ball upward from the palms of the free hand and hitting it as it falls so that it first bounces on the server's court and then returns to the opponent's court after passing over the net.

5. No spin may be imparted to the ball by the fingertips during serving. This was not always the case. Finger spin, particularly in the United States, had progressed to the point that specialists could offer untouchable services, and the game had become ludicrous. In 1937, finger spin was outright prohibited.

6. The ability of one player to overcome another through a well-thought-out strategy piques the interest of the audience.

7. Increasing the game's tempo, slowing it down, changing the direction of the ball or imparting new spin or pace to the ball, and using soft drop shots over the net when the opposition is out of position are some of the strategies that may be utilized to support the intended strategy.

Play of the game

1. The slow or conservative play was once so dominating that it took an hour to determine a single point at the 1936 World Championships in Prague. Play is now limited. If a game is not completed 15 minutes after it begins, the remainder of that game and the remaining games of the match are played under the Expedite System.

2. If a game is not completed 15 minutes after it begins, the remainder of that game and the remaining games of the match are played under the Expedite System.  After each point, the service changes.

3. Outdoor Table tennis can be played with one player at each end of the table, or with two players at each end who can be both men and women, or one of each.

4. Table tennis is widely popular as a leisure activity and is played in all sorts of sports clubs, social clubs, and gaming rooms, in the house, and even outdoors when conditions are sufficiently quiet.

Finally, we consider where we can get the greatest quality goods at a fair price. The SZX foldable waterproof table tennis table is the solution.The waterprrof ping-pong table includes a folding table, allowing you to practice in a compact space. When not in use, the table may be folded down to decrease the amount of room it takes up. The table's legs are equipped with movable casters, allowing you to move anywhere and at any moment without being distracted by the court.