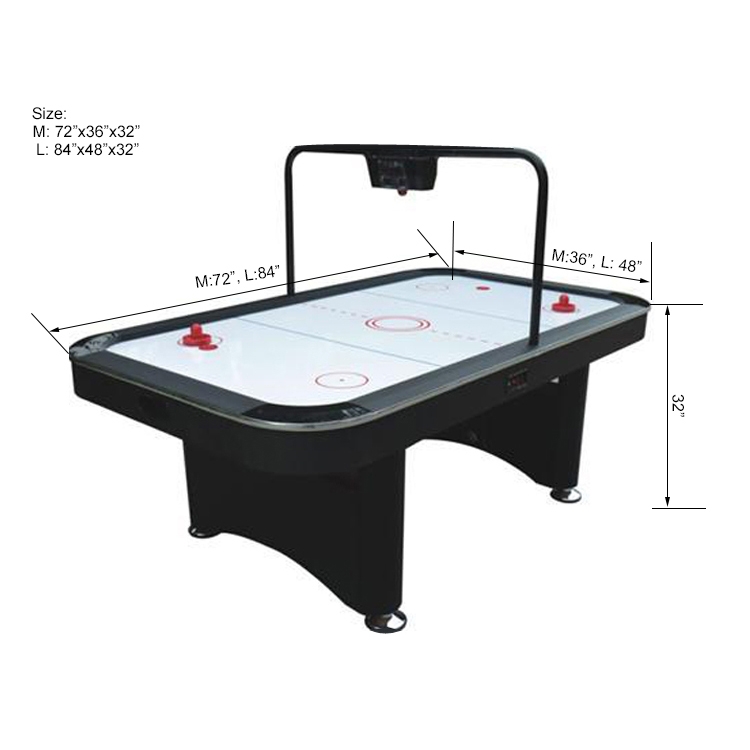 What Is The Game Air Hockey Table?

Air hockey is a very popular sports game. The game is played on a table with a smooth surface and has two goals at each end. Hockey sticks are used to hit a small puck across the table and score. The player who scores more goals wins the match.

Air hockey tables can be found in most homes as well as restaurants and bars around the world. It is an exciting game that can be played by people of all ages, including kids, teenagers, and adults. Air hockey tables are also available in different shapes and sizes to suit players with different skill levels.

Air hockey is a table game played on an air-hockey table. Air hockey is a sport that began as an arcade game in the 1970s and grew in popularity during the 1990s.

The air hockey table has two sides, with a net in the middle of each side. The goal of this game is to score points by hitting a puck into the opponent's net. The puck is moved by a powerful blower that creates a cushion of air below it.

Players use a stick to move the pucks and score points. The players must try to prevent their opponents from scoring by blocking them with their sticks or making them miss shots.

Why The Game Air Hockey Table Wholesale Is A Good Way To Boost Business?

Game air hockey tables are popular recreational items that are often found in arcades, amusement parks, family entertainment centers, and other venues where people go to have fun and relax.

There are several ways that store owners can make money by offering game air hockey tables for use to the public:

Charge a fee for use:

Store owners can charge customers a fee for each game of air hockey they play. This fee may be based on a set price per game, or on a time-based rate, such as a certain amount per hour of play.

Store owners can also make money by selling food and drinks to players and spectators. This can include items like snacks, sodas, and even meals, depending on the type of establishment.

By offering air hockey tables and other games, store owners can create a fun and engaging atmosphere that attracts more customers to their establishments. This can lead to increased revenue from sales of items like food and drinks, as well as from the use of the air hockey tables themselves.

Rent out the tables:

In addition to offering the tables for use to individual customers, store owners can also rent out the tables to groups or organizations for special events, parties, and other occasions.

Store owners can also make money by selling items related to air hockey, such as replacement pucks, mallets, and other accessories.

Overall, there are many ways that store owners can make money by offering game air hockey tables for use to the public. By charging fees for use, selling food and drinks, and offering additional entertainment, store owners can generate significant income from these popular recreational items.

We recommend that you deal directly with the provider - or manufacturer - of Game Air Hockey Table Wholesale as they are more specialized. Recommended here: SZX.

Benefits Of The Game Air Hockey Table From SZX:

Here are the features and benefits of a professional seven-foot Game Air Hockey Table:

With an Electronic Score: You Don't Have to Count Yourself

One of the benefits of a professional seven-foot game air hockey table is that it comes with an electronic score display. This means that you don't have to keep track of the score yourself, as the table will automatically keep track of how many goals have been scored by each player.

This makes it easier to focus on the game and enjoy the competition, without having to worry about keeping score.

Another feature of a professional seven-foot game air hockey table is a powerful motor fan that helps keep the puck in play. The fan helps to blow the puck across the surface of the table, allowing for fast-paced gameplay and efficient scoring. This can add to the excitement of the game and make it more enjoyable for players of all skill levels.

Handy Goal Hole: Allows You to Catch the Ball Fast

A professional seven-foot game air hockey table also comes with a handy goal hole, which allows players to quickly catch the puck after it has been scored. This can help to keep the game moving along at a steady pace, as players don't have to waste time retrieving the puck from the opposite end of the table.

The goal hole also makes it easier to keep track of the puck during play, as it is always within reach. And it also has a leg level to adjust the height and level of the table. This makes it better suited to the venue.

The Game Air Hockey Table Is Easy To Maintain:

This Game Air Hockey Table Wholesale is made of high-quality material. Its tabletop is MDF with PVC lamination, which is very hard and wear-resistant. This will reduce your maintenance costs and save you money.

A professional seven-foot game air hockey table is also easy to maintain, which can help to keep the game running smoothly for years. The table comes with a high-quality finish that resists scratches and dents, so you don't have to worry about damaging it while playing.