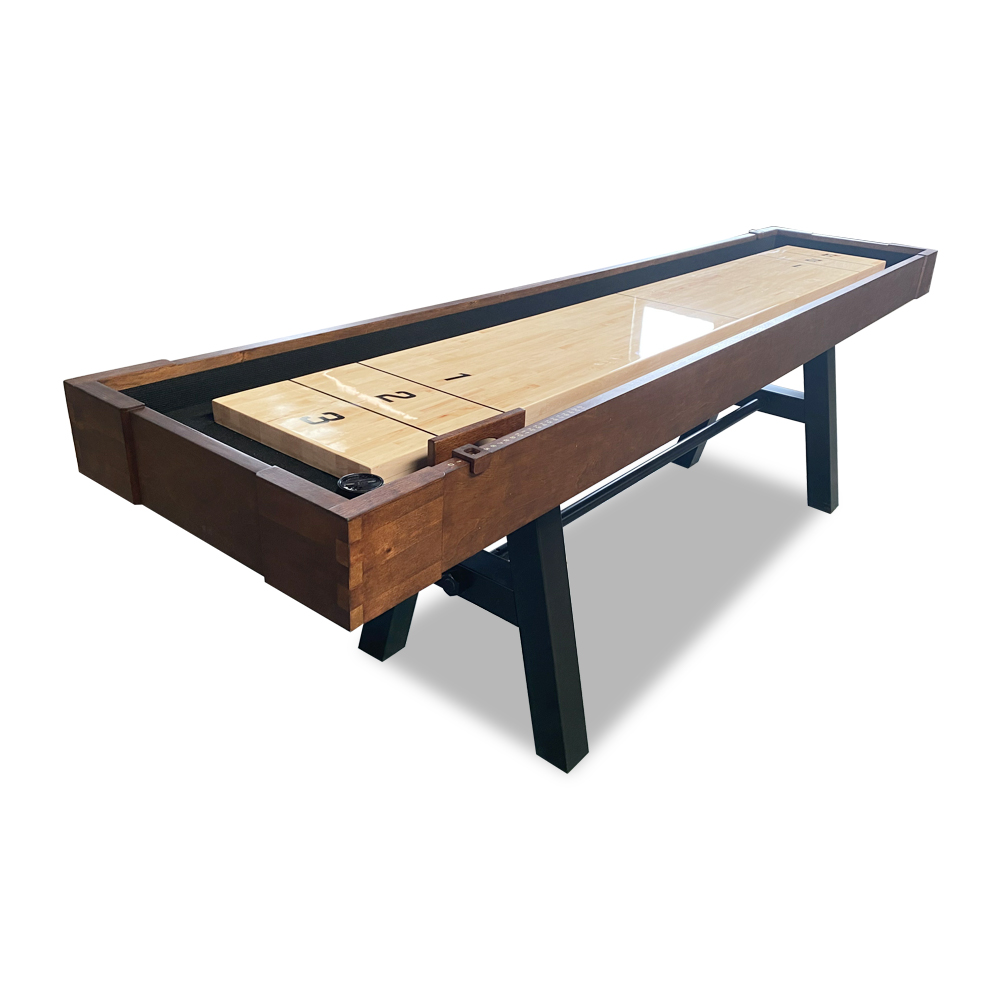 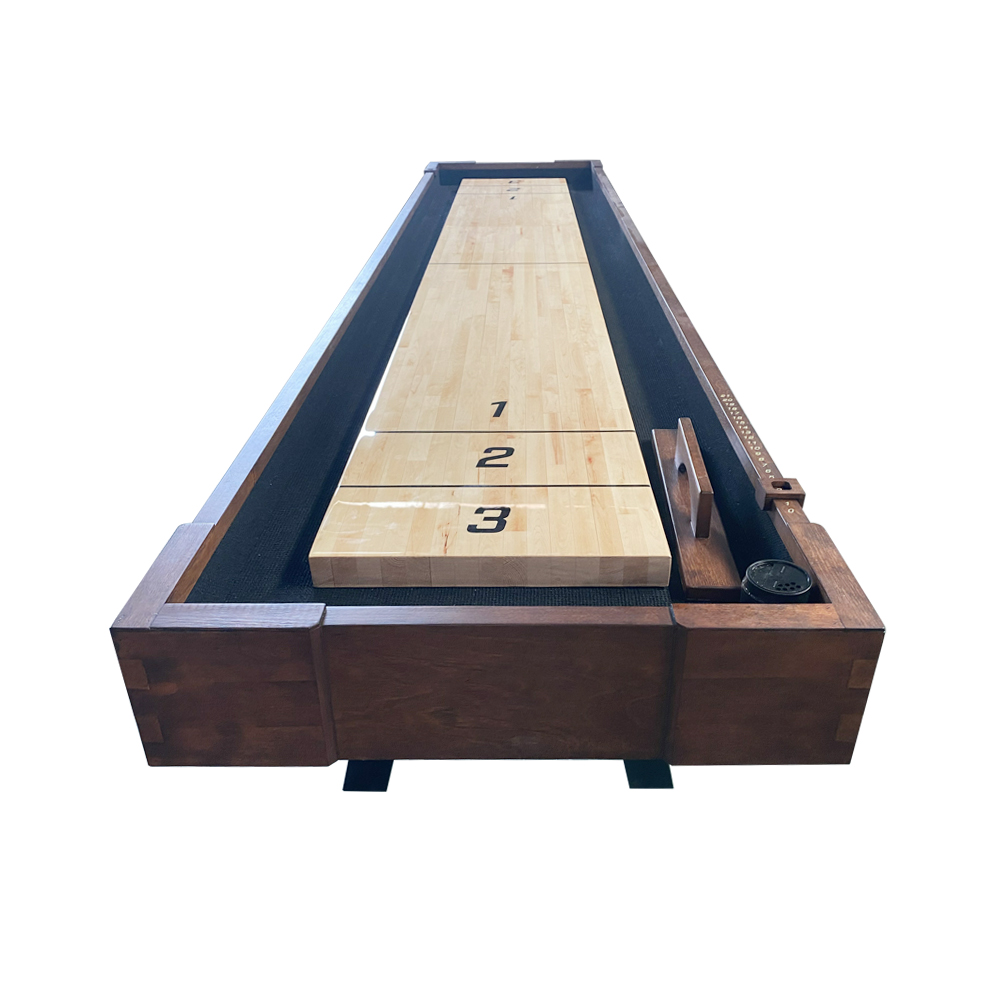 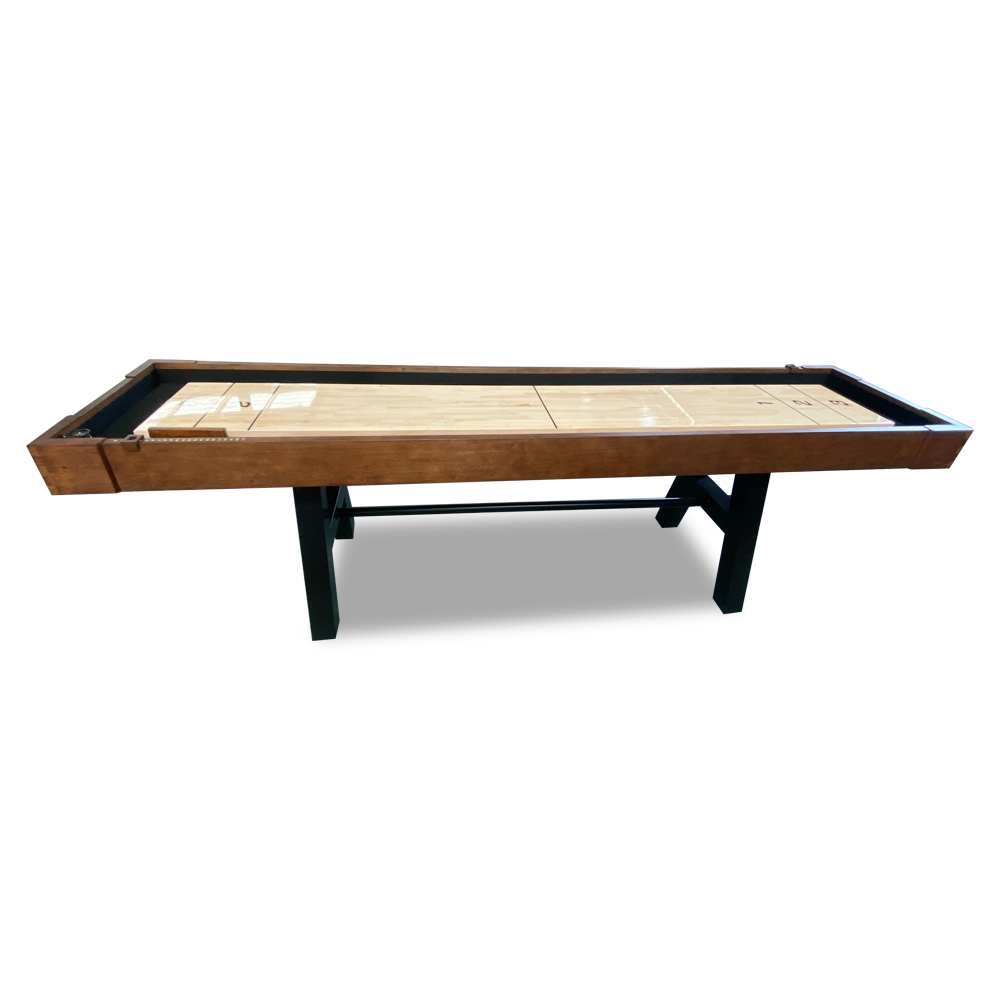 Double solid wood paint corner protection, strong corner can effectively protect the table scratch damage, so as to extend the service life of the table.

The MDF board is finished with UV technology, so it is very bright and smooth so that the puck can easily slide across the board.

There have 8pcs pucks with two different colors,It has a very smooth bottom and is very easy to slide on,will not rust. 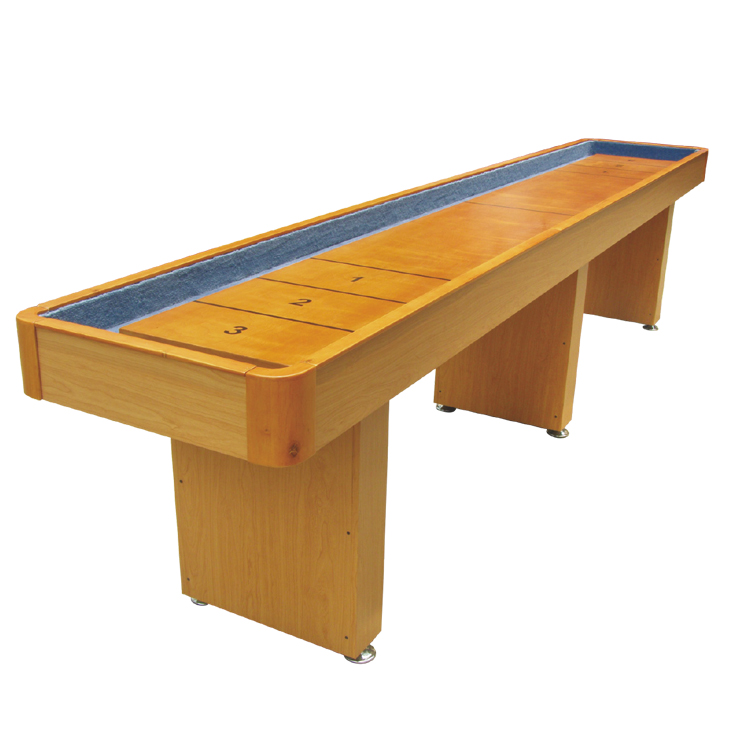 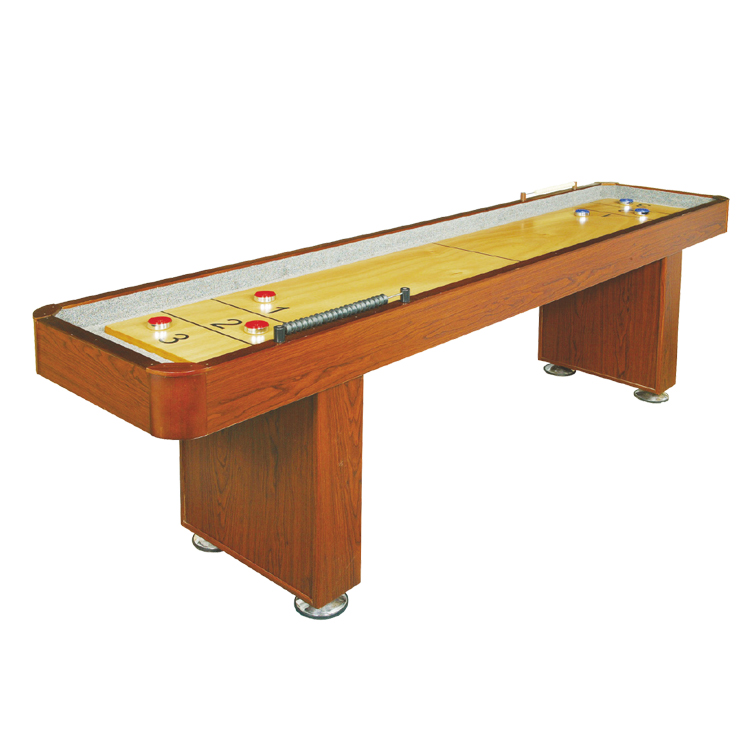 A numbered scoring zone is posted on the playfield. Some tables include a scoring zone at either end of the playfield, whereas others only have one. Some playfields have a concave contour, which helps to keep pucks on the table and adds another dimension to the game. For best performance, the playfield should be kept immaculately clean. A silicone powder is also placed over it. This powder, often known as shuffleboard wax or shuffleboard sand, is formed of innumerable small silicone balls. It allows pucks to glide easily across the table and is available in a range of grades based on friction or speed.

The cradle is the primary body of the table. This may be manufactured from any type of wood, although maple or oak are the most frequent. The cradle may be personalized by using wood stains, paint, aesthetic elements, or anything else. A space exists between the cradle and the playfield, forming a gutter into which pucks can fall. The legs will be sturdy, built to hold the whole weight of the table. Each foot will be supported in some fashion and supplied with a level adjuster, allowing the operator to perfectly level the table for a flawless, straight glide.

Shuffleboard tables are frequently constructed to order, allowing you to customize your table with a custom finish or wood stain, as well as add a logo to the playfield. Scoreboards and abacuses can be added, and some tables are designed to be used outside.

Choose your shuffleboard table wisely, and it will reward you with decades of dependable, enjoyable games. Our Champion shuffleboards are widely regarded as the best in the industry, including extended warranties, proprietary game features, and unrivaled performance.

How To Play it?

1. A shuffleboard game table is a simple concept, but it is not easy. Give your puck a moderate push down the playfield into the scoring zone.

2. The puck is supposed to stop in one of the numbered bands. When your puck comes to a stop in a scoring zone, you get points for that zone.

3. To collect the points, your puck must cross the line - if it is sitting on the line between zones 2 and 3, you only earn 2 points.

4. Only pucks that are placed in front of the opponent's pucks score. As a result, if your opponent's best puck is stopped in zone 2, your puck in zone 1 will not score.

5. if you push too hard and slide off the end or bounce off another puck and finish up in the gutter. Isn't it simple?

1. Using other pucks is one of the most enjoyable features of the game. You can aim at an opponent's puck, knocking it out of place or knocking it off the table entirely.

2. If you time it well, you may utilize the other puck as a brake, bringing your puck to a halt as it bounces off the table. If you already have a strong score, you can sacrifice your puck with an opponent's puck to prevent anybody from scoring.

3. Based on the table, you can also make use of the concave contour of the playfield. Learn how to use the angle to bend the puck around an opposition or to keep the puck from sliding off the side.

4. A long, well-balanced shot up the playfield's edge may decimate a crowded playfield. Shuffleboard's tactical play is half the pleasure.

1. Place the puck on the table, palm over the top, and arms bent. Your thumb should form a circle around the back of the puck.

2. To steady the puck, softly encircle it with your fingertips, but do not let any portion of your hand or fingers touch the playfield. When you're ready to shoot, extend your arm and release the puck by effortlessly straightening your elbow.

3. Before releasing the puck, run it back and forth a few times to acquire a feel for the playfield, puck weight, and any concave profile.

4. As your technique improves, think about adding a backspin to your puck. This might give you better control and slow the ball down as it approaches the scoring zone. You may also discover that using your dominant hand isn't always the best option — try using both your right and left hands to see if you can get an edge.

5. At the start of the game, aim for the best possible score without overshooting. As the scoring zone grows more crowded, use techniques to gain an advantage. This might involve knocking your opponent's pucks off the ice, 'hanging' your puck over the edge to entice your opponent into a hazardous response, or preventing your opponent's clear path to the greatest scoring zone.